Forbes: Obamacare Billionaire: What One Entrepreneur's Rise Says About The Future Of Medicine

An article in Forbes appeared today (4/18/12) entitled "Obamacare Billionaire: What One Entrepreneur's Rise Says About The Future Of Medicine" by Matthew Herper.

The article is largely a hagiography of Cerner founder Neal Patterson:

North Kansas City is an unlikely place to launch a revolution in American health care. Yet here, amid the dilapidated grain elevators, fast food joints and vast green plains, the dream of using computers to keep you alive at a reasonable cost is battling onward. In a bunkerlike building built to withstand a direct hit by a category five tornado, 22,000 servers handle 150 million health care transactions a day, roughly one-third of the patient data for the entire U.S. Records of your blood pressure, cholesterol, lab test results, that gallbladder surgery last year—and how much you paid for it—may sit there right now. Armed guards stand watch.

This is a data center at the headquarters of Cerner, the world’s largest stand-alone maker of health IT systems—and company number 1,621 on FORBES’ Global 2000 list—where the blood-and-guts realities of medicine meet the ­sterile speed and exactitude of the computer revolution.

Omitted are some pertinent negative accounts, such as Cerner's role in the failed £12.7bn ($20bn U.S.) National Programme for IT in the NHS (NPfIT), as described here and here.

Patterson is quoted with the standard industry bellicose grandiosity and hysterics about computers "revolutionizing" (as opposed to facilitating) medicine:

... In 1999 a report from the prestigious Institute of Medicine gave Patterson hope that the rest of medicine was ready to follow in Mayo’s footsteps. Titled “To Err Is Human,” the report detailed how between 44,000 and 98,000 people die every year in hospitals from preventable mistakes, like getting the wrong medicine or the wrong dose of the right one. The ­report specifically prescribed better computer systems as a way to prevent these deadly mistakes. Patterson cites that study as the moment when health IT entered the mainstream. But it was still slow going, and that drove him nuts. His customers at that time were more worried about the Y2K bug than they were about revolutionizing health care.

I first heard him and other HIT CEO's uttering the "revolution" line at a Microsoft Healthcare Users Group meeting ca. 1997 and attended largely by IT technicians. I was probably the only Medical Informatics-trained professional in attendance, and perhaps the only physician there.

When I then asked those in the room how many had healthcare experience or had even read the Merck Manual, few hands went up. The CEO's could not then satisfactorily explain how medicine would be "revolutionized" by such a crowd. (One of those CEO's, of erstwhile HIT vendor HBOC, was later found to be seriously cooking the books after acquisition by McKesson. See "Former McKesson HBOC Chairman Convicted of Securities Fraud; Defrauded Investors Lost in Excess of $8 Billion" at FBI.gov. Some revolution...)

Unfortunately, most medical errors have little to do with documentation, either paper or electronic, as I wrote in Dec. 2010 at "Is Healthcare IT a Solution to the Wrong Problem?". The latter, however, has introduced many new errors modes and other social-technical problems, permitted massive security breaches (it's very hard to haul away 10,000 paper charts without being noticed) and opportunities for medical records evidence spoliation simply not possible with paper.

There are a few Ddulite-ish quotes from Eric Topol and David Bates in an article with a clear tone of exalting health IT.

I am quoted in the Forbes article in about the only comment critical of health IT, and the only comment concerning the ethics of human subjects experimentation conducted with this technology, as it exists in 2012:

... the Hippocratic oath says nothing about breaking eggs to make omelets. “We’re kind of headed in the wrong direction,” says Scot Silverstein, a health IT expert at Drexel University who believes that the current systems are too prone to randomly losing data [I had cited this study - ed.] and complicating doctors’ lives.

While the "breaking eggs to make omelets" metaphor was not mine, it reminded me that I just carried out my final earthly duty for my mother, injured in mid 2010 by a health IT-related error and deceased since June 2011. I filed her final IRS tax return yesterday, the due date.

I just hope my mother is enjoying her omelet in the Pearly Gates Diner. Scrambled eggs were about all she could eat well after the health IT accident.

As a result of that experience, my new business card (phone # redacted): 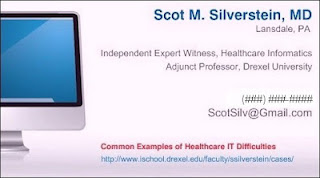 I no longer merely write about health IT risks. I find past involvement with attorneys early in my medical career, as Manager of Medical Programs and Medical Review Officer (drug testing officer) for one of the largest public transit authorities in the United States, quite helpful in this new role.

The "eggs that get broken", as in a well known old nursery rhyme from the early 1800's, cannot be reassembled. Those injured or killed in the unregulated, thoughtless, cavalier journey to some mystical medical cybernetic utopia deserve justice, and the eggheads responsible for their harms have earned the privilege of explaining themselves in the courtroom and being properly penalized where appropriate.